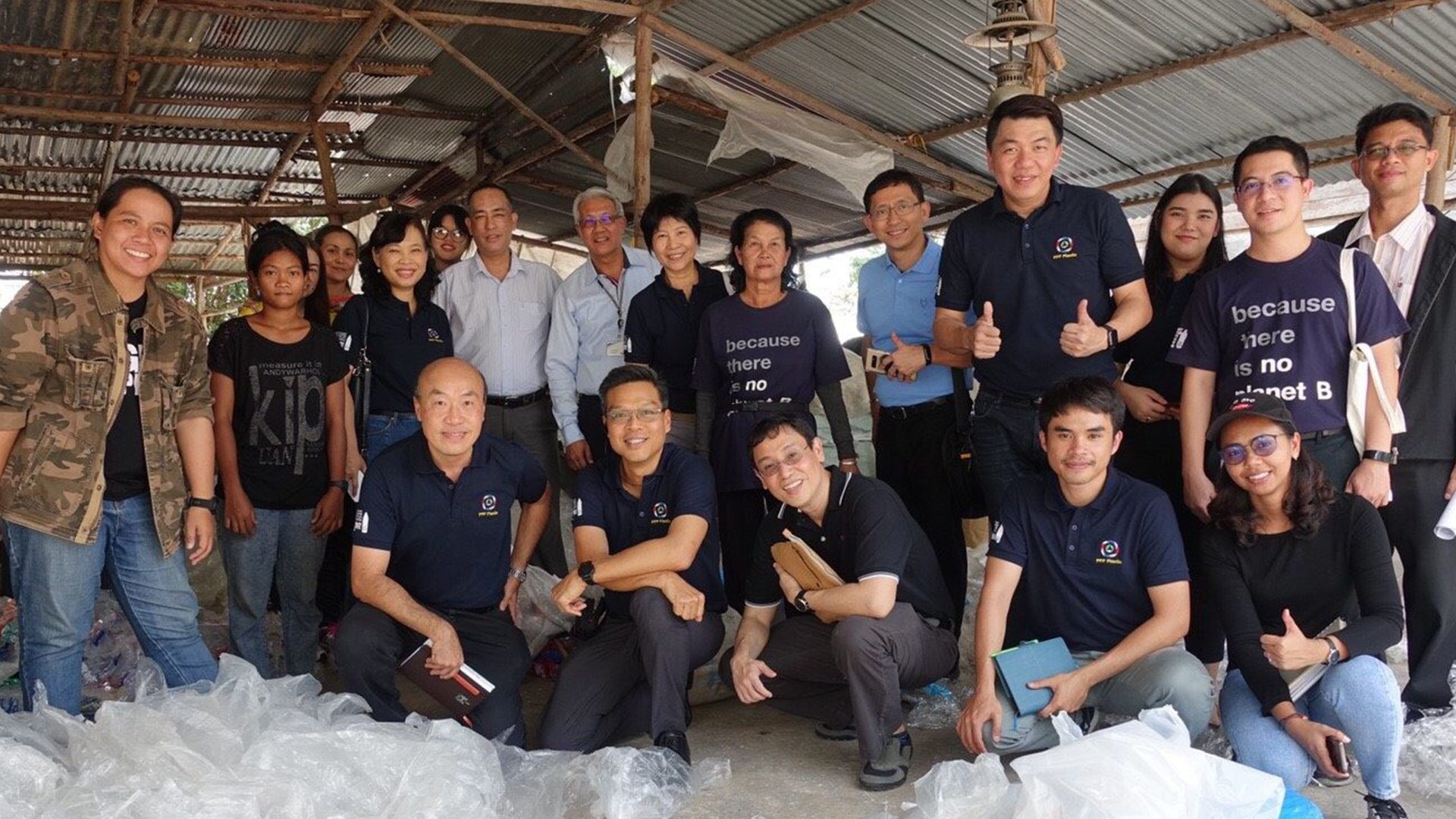 SCG has always placed great emphasis on sustainable development in its business, and in recent years, the circular economy has emerged as a model that can help foster economic, social, and environmental sustainability. Therefore, this concept has been applied to SCG’s business operations and used as the basis for SCG Circular Way, which promotes resource maximization at every stage of a product’s life, from development, production and consumption to collection back to reuse as raw material, to create a closed-loop system. Today, SCG is working with all sectors to drive the principles of circular economy in communities, to develop tangible solutions to plastic waste problems, and to eventually scale up the initiative to the national level.

Forging a path towards sustainable and systematic plastic waste management on the national level requires the cooperation of government agencies, private businesses, and civil societies. PPP Plastics (Public Private Partnership for Plastic and Waste Management) was created to decrease at least 50% of marine plastic waste in Thailand by 2027. As a co-founder, Chemicals Business, SCG has contributed to the development of the 2018-2030 Roadmap for Plastic Waste Management by the Department of Pollution Control under the Ministry of Natural Resources and the Environment, which aims to reduce the consumption of single-use plastics and increase the reuse of plastic waste to 100% by 2027. These goals have ultimately led to the development of a master plan for plastic waste reduction through the circular economy, which consists of four major components, namely the development of integrated waste segregation infrastructure and systems; the promotion of recycling and upcycling businesses to add value to plastic waste; the involvement of the plastic industry, brand owners, and retailers in waste management, and the promotion of responsible consumer behavior and at-source waste sorting. To make the recovery of useful resources as advocated in the circular economy possible, all these components must be developed altogether.

The master plan serves as guidance for all parties involved. PPP Plastics began with the development of Rayong Model – a provincial- and community-level circular economy model that has been applied to areas under 18 local administrative organizations and Rayong’s provincial administration organization since December 2018 and is set to be implemented across Rayong by 2022. The major reason Rayong has been chosen to pilot this waste management model is because of its unmatched readiness. Not only does Rayong have a strong network of leaders and communities, but it is also a province in the Eastern Economic Corridor (EEC) that is equipped with the infrastructure for efficient waste management, such as integrated solid waste disposal centers, composting facilities, recycling facilities, with a waste-to-energy plant being constructed. In addition, its coastal location means that it has a high risk of releasing plastic waste into the ocean. The primary focus of Rayong Model is raising awareness of the value of resources among local people by educating them about different waste types in their daily life, which are organic, recyclable, general, and hazardous waste. They are also taught how to distinguish different types of plastics, which enables them to sort waste correctly, as well as how to prepare their waste for sale. Waste that has been cleaned, dried, and sorted correctly fetches a high price, and even higher if it is sorted further by plastic type, such as PE and PP, and by color. This model has enabled local communities to generate more income. For instance, Rayong Ban Eau Arthon Community (Wang Wa) has been able to expand its recyclable waste bank and earn over 10,000 THB per month. In addition, well-sorted waste helps maximize recycling efficiency and save waste disposal costs.

Consistent progress tracking, coupled with the cooperation from every party involved, the project started to bear fruit quickly. In 2019, the participating communities successfully collected about 300 tons of cleaned and sorted plastic bags and plastic packaging films for further recycling. In the second phase of Rayong Model, PPP Plastics and local administrative offices aim to expand the initiative to more locations and replicate this success elsewhere by developing models for schools, hotels, and department stores. Their targets are to eliminate all plastic waste from landfills in Rayong by 2022 and ensure that all refuse is disposed of properly across the province.

Other activities of PPP Plastics

In addition to Rayong Model, which demonstrates how circular economy principles can be applied to communities in other provinces, Bangkok Metropolitan Administration has collaborated with seven leading organizations in Khlong Toei District to launch a similar project in an urban context named “Khlong Toei Model.” This initiative seeks to study the amount and types of waste generated locally as well as the current waste management system in order to develop targeted models for specific groups, such as hotels, department stores, and offices, which they hope will be adopted and subsequently scaled up to other locations.

PPP Plastics has also been working with various sectors to launch other plastic waste management projects. An example is a collaboration with the Plastics Institute of Thailand and Chulalongkorn University to create a material flow analysis database to show data of production and consumption of plastic products as well as the management of plastic waste, recycling volume, and the amount of plastics leaked into the environment and the sea. In addition, PPP Plastics has been collaborating with members in its network to push for integrated plastic carrier bag and plastic film packaging management and advocate the use of plastic carrier bags that are thicker than 36 microns, which can be use multiple times before they are recycled. PPP Plastics is also working on a project named “Plastic Bag Circulation Drop Point” in collaboration with modern trade businesses, department stores, gas stations, and other locations to set up drop points for clean plastic carrier bags and plastic film packaging, so that they can be recycled and the “make-use-return” management cycle can be completed. The circular economy concerns everyone.

As the key to economic and environmental sustainability, the circular economy is a set of principles that everyone should be aware of, understand, as well as apply to their own work and daily life. As manufacturers, entrepreneurs and brand owners need to see how their products are utilized by end-users and how their products can be recycled or made use of at the end of their lifetime to achieve sustainability. This is a challenge that business owners can tackle through packaging design, material selection, and the use of innovation along with fostering public awareness of proper plastic use. On the other hand, consumers can do their part by sorting waste correctly and passing on that knowledge to people around them, which will help expand the practice and contribute to successful waste management on the national level. PPP Plastics is a project that addresses circularity in a tangible way. SCG has joined the project as a co-founder, and I have the opportunity of working with the project right from the beginning. We have built a network of relevant government agencies, businesses, and other players in supply chains, from plastic resin producers, plastic processors, manufacturers, brand owners who use plastic packaging, to department stores and convenient stores. The network also includes other plastic-related organizations, such as the Plastic Industry Club under the Federation of Thai Industries, the Thai Plastic Industries Association, and the Plastics Institute of Thailand, as well as domestic and overseas civil societies. The goal of the network is to jointly develop prototype systems and projects for the government and business sectors adopt in order to reduce plastic marine debris in Thailand and maximize plastic waste reuse.

The main challenge of this project is to change the habit of people in society and encourage them to sort waste at source. To do this successfully, we will have to foster awareness of the importance of waste sorting among all stakeholders, including relevant government agencies and business sectors, waste management investors, the general public, and tourist as well as introduce regulations and put in place holistic management. In addition, we will also require financial support and leverage the expertise of our members to develop prototype systems and projects, so that they could be adopted nationwide.

I would like to encourage everyone to set a good example and start separating waste into at least four types, which are organic waste, recyclable waste (including cleaned plastic containers), general waste (including contaminated plastics), and hazardous waste, so as to facilitate reuse and recycling. By starting with yourself, you will inspire your family and expand the practice of waste sorting to your circles, ultimately improving society at large for our next generations. 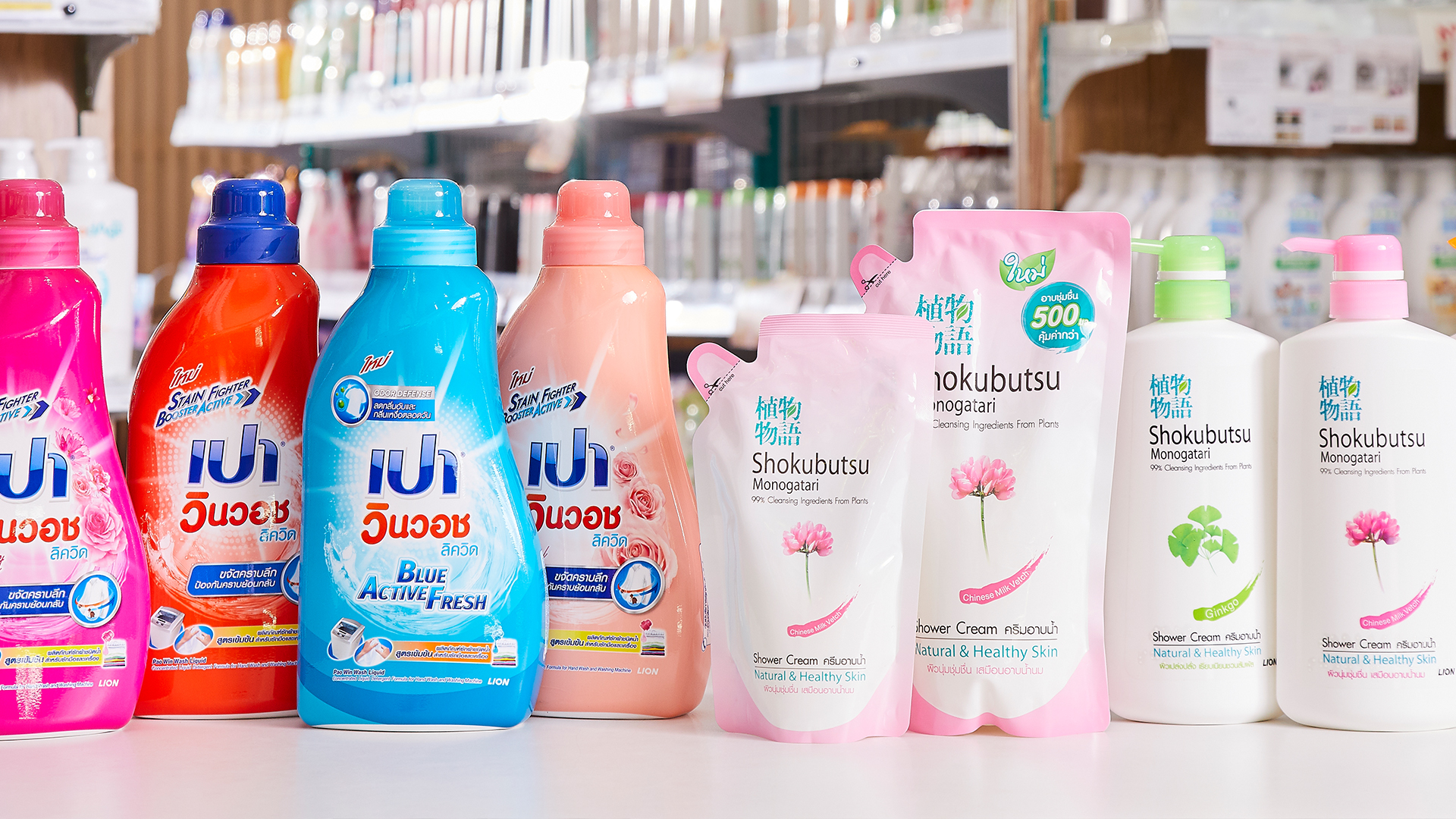 Plastic packaging has become part of our daily lives and an essential component in commodity goods. As a developer of innovative plastics, SCGC has been working to make plastic packaging greener in various ways, and now it has joined forces with LION, one of Thailand’s leaders in the commodity goods industry, to ensure that its…
Thanks to its convenience and wide range of functionalities, flexible packaging has found its way into almost every area of our daily life, such as snack pouches, frozen food pouches, refill pouches, and etc. However, today’s flexible packaging is consists of several layers of different materials that are inseparable. this means it is difficult… 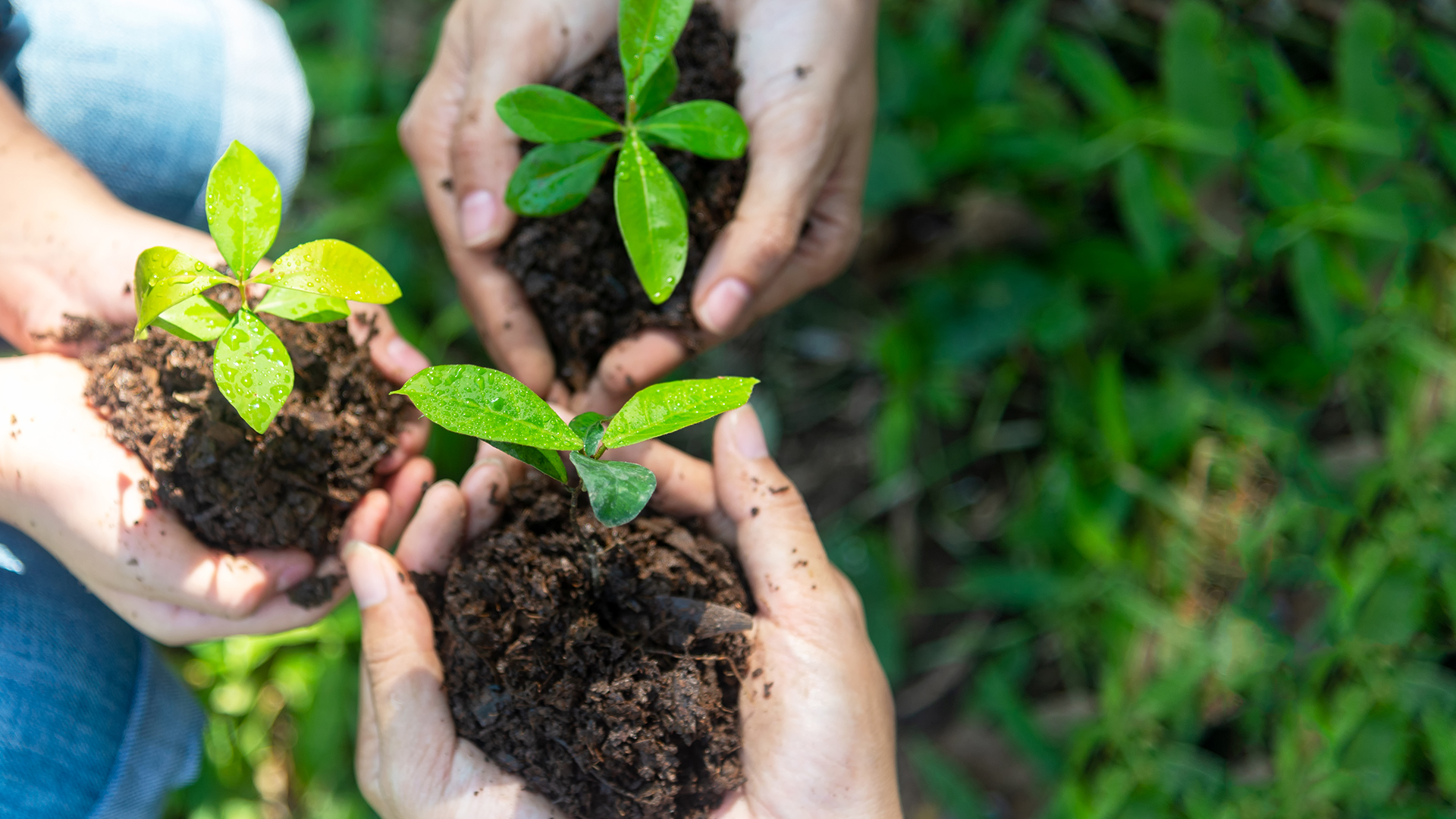 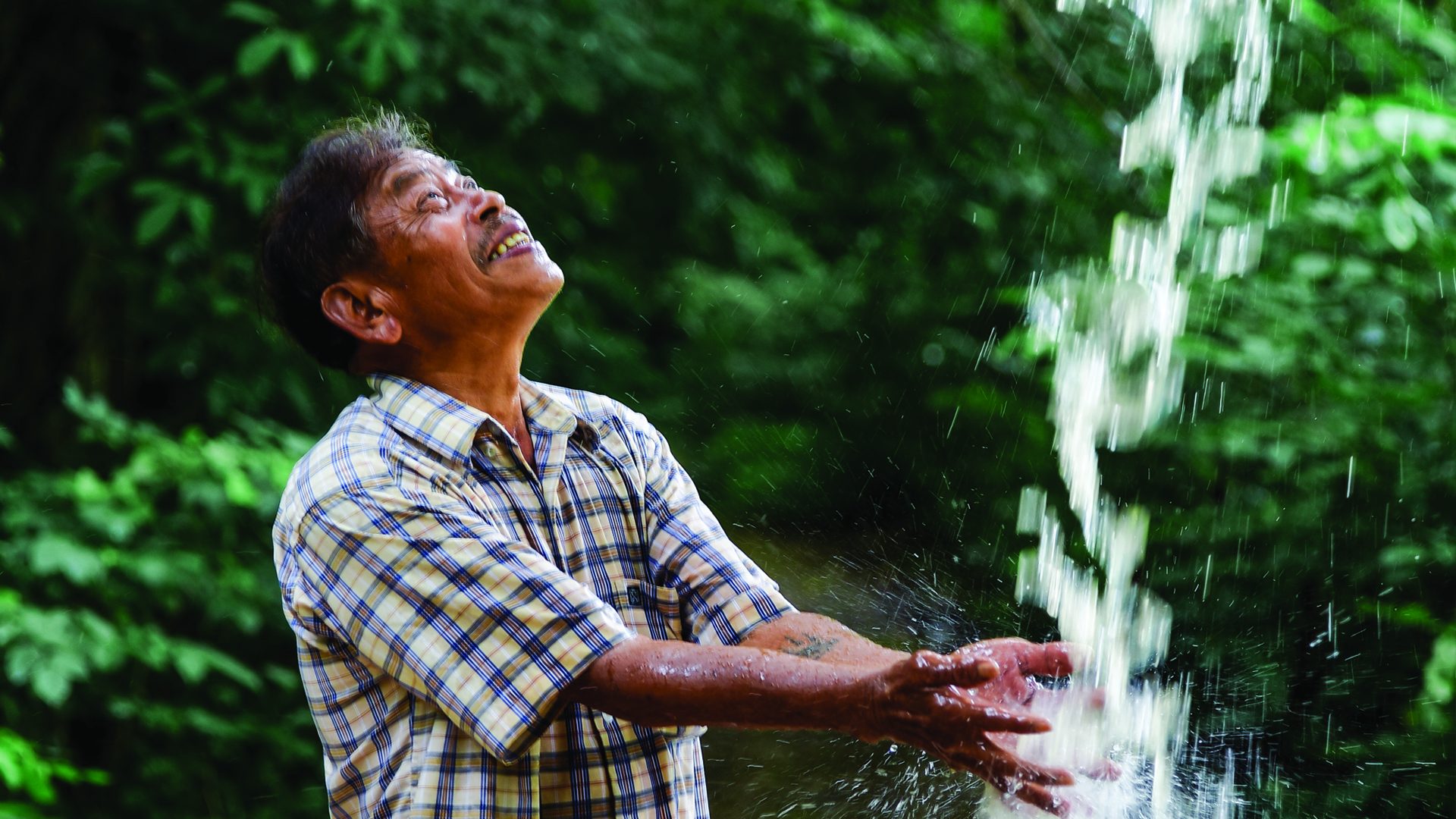